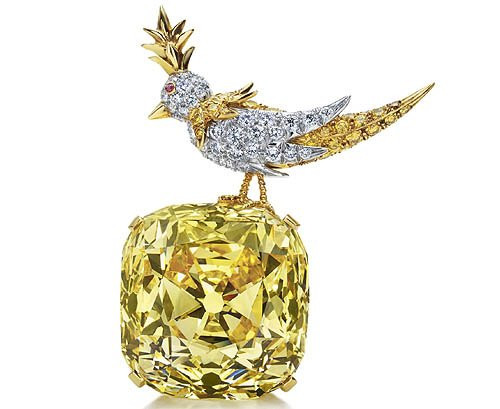 One of the world’s most iconic jewels, the 128.54-carat Tiffany Diamond, has received a new setting as part of the celebrations to mark the jewellery brand’s 175th anniversary.

More than a year in the making, the gemstone has been set anew in a platinum and diamond necklace, totaling more than 120 carats of white diamonds.

It is the fourth time the Tiffany Diamond has received a new setting since its discovery in the Kimberley mines in South Africa in 1848.

“The diamond is the most important gemstone in the world and honors the vision of our founder, whose acquisition of the stone established Tiffany’s diamond heritage.”

The new Tiffany Diamond will embark on a world tour in 2012, including scheduled events in Tokyo, Beijing and Dubai, before returning home to New York City to take pride of place in Tiffany’s Fifth Avenue store.

Most famously, the Tiffany Diamond was worn by Hollywood actress Audrey Hepburn in 1961 for publicity photographs for the movie Breakfast at Tiffany's.