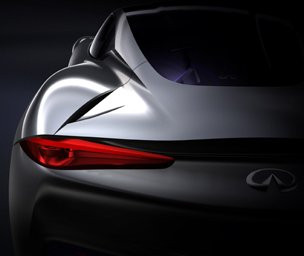 Japanese luxury car maker Infiniti Motors has announced that its high performance electric supercar concept is to be called the Infiniti Emerge-E.

The zero-emissions Emerge-E will use electric propulsion, as well as a range extender internal combustion engine, with the hardware adopting a mid-mounted position for optimal handling.

Speaking recently, Andy Palmer, vice president of Infiniti's parent company Nissan, said: "Infiniti already has hybrid and clean diesel models on sale. And with an all-electric sedan on the way, the natural next step was to push the boundaries where performance and the environment intersect."

There are familiar elements on the Emerge-E, such as the wave grille and muscular front fenders, but the overall design is considered far bolder than anything created for production by Infiniti so far.

The Emerge-E will be unveiled publicly for the first time at the 2012 Geneva Motor Show next month.