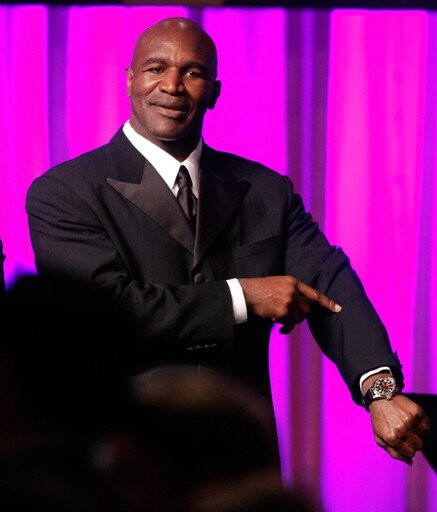 A unique timepiece created in honour of former Heavyweight boxing legend Muhammad Ali sold for $60,000 at a charity auction in Phoenix, Arizona on Saturday.

Donated by luxury watch-makers IWC, the Big Pilot’s Watch in 18-carat white gold was sold at the annual Celebrity Fight Night gala event, which was established to raise funds for the Muhammad Ali Parkinson Center.

The watch, which is modelled on IWC’s famous range of aviation timepieces, features an unusual combination of hands and appliqués, highlighted with signal-red which is mirrored on the inside of the black alligator leather strap, referencing the red boxing gloves that Ali wore for his fights.

The watch’s case back displays Ali’s signature and an inscription reading “Edition Muhammad Ali, ONE OUT OF ONE.”

Speaking on the night, IWC’s CEO, Georges Kern, said: “The man is an icon: simply one of the world’s greatest sporting personalities of our time.

“That was the reason we decided to mark Muhammad Ali’s 70th birthday in January with a special watch in white gold in honor of the man who was once voted Sportsman of the Century.”

As well as Ali, a number of other celebrities were also present to lend their support, including actress Halle Berry, actor Billy Crystal, musician Lionel Ritchie and former boxer Evander Hollyfield.