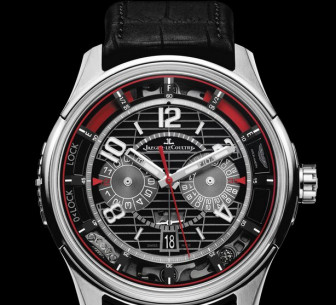 Over the past eight years Swiss watchmaker Jaeger-LeCoultre and British car manufacturer Aston Martin have worked together to create some truly remarkable timepieces.

Now the two iconic brands have teamed up once again and created the brand new AMVOX7 – billed as the first “vertical-trigger chronograph”, a function that is said to have revolutionised the way that athletes time their performance.

Introduced in 2005 by Jaeger-LeCoultre, the vertical-trigger function enables the watch to automatically measure short time intervals, ensuring that users no longer needs to hold the push-piece down in order to ensure instant activation of a race start. Instead, a simple press on the watch glass is enough to pivot the case along its horizontal axis and thus immediately start a new measurement.

As well as this unique feature, the watch also boasts a distinctive radial power-reserve display. When the watch is wound, the red power- reserve discs draw closer to the 12 o’clock numeral, and as the barrel winds down, they disappear again in order to gradually reveal the chronograph levers.

In terms of its nods to Aston Martin, the watch features a motif on the dial that reproduces the design of the radiator grill on Aston Martin’s latest model, the Vanquish.

Other notable features include a titanium case, satin-finished lugs, a 65 hour power reserve, a frequency of 28,000 vibrations per hour, and over 330 individual components.

Jaeger-LeCoultre was founded in 1937.