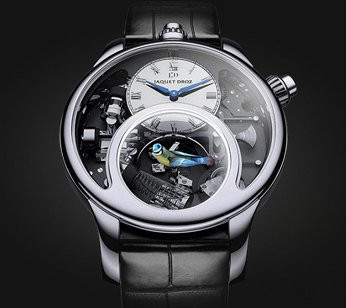 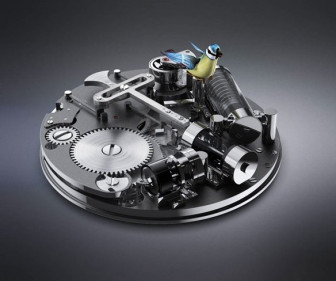 Designed to mark the brand’s 275th anniversary, the Charming Bird timepiece boasts a an intricate mechanism that allows the mechanical bird to turn, flap its wings, move its head and tail, and open its beak to emit a distinctive chirp.

The chirps are produced by the rapid movement of a piston-driven bellows system in and out of a shaft. The watch’s entire mechanism is visible through a sapphire crystal dial where the unique gear train, bridges, plate and other parts of the 21-jewelled movement can be viewed.

Other notable features include a crown situated at the 12 o’clock position, an off-centred dial featuring Roman numerals as hour markers with blued hour and minute hands, and 40 hours of power reserve.

The Jacquet Droz Charming Bird timepiece is limited to just 28 pieces, each priced at around $500,000.