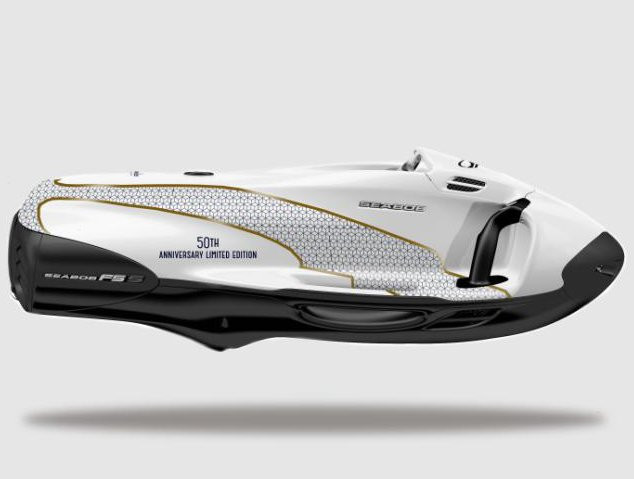 The Seabob water toy is an enduring favourite with yacht owners and charterers, as well as anyone with an amphibious streak.

Now Cayago, the German manufacturers of the popular water craft which lets you fly through – and under – the water like a dolphin, has teamed up with British motoryacht makers Princess Yachts to mark the shipyard’s 50th anniversary.

The partnership has resulted in the creation of the Princess 50th Anniversary Limited Edition collection, comprising two specifically crafted SEABOB editions for Princess, both of which were launched at last month’s 2016 Düsseldorf Yacht Show.

The two limited edition designs, Lady `65 and Cubic `65, boast modern lightweight construction and are equipped with efficient electric drive systems. They can be lifted by a single person without aids from the water, making them the ideal accessory, not only for larger yachts with lifting devices, but also for smaller boats.

The design incorporates an illustration by renowned artist Jaume Vilardell, who was commissioned by Princess Yachts to create the brand’s 50th anniversary campaign artwork, and was inspired by the 1960s.

Over or under the water, Seabob’s crafts score highly in manoeuvrability and performance. Their easy handling makes them suitable for both beginner and advanced users like.

Both crafts in the Princess 50th Anniversary Limited Edition collection are available for €11,255 euros.