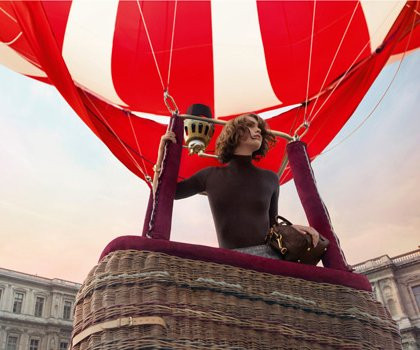 French fashion house Louis Vuitton has become the latest luxury brand to use the world famous Louvre museum in Paris as the backdrop for a lavish promotional campaign.

In what is Louis Vuitton’s first ever TV campaign video, American model Arizona Muse is seen leaving her apartment and walking through the streets of Paris carrying a Monogram Louis Vuitton bag.

Upon noticing a mysterious man is following her, she enters the Louvre museum and walks past its array of famous art pieces including Leonardo da Vinci's Mona Lisa.

She then discovers the key to a trunk containing a letter that we are soon to discover is a special invitation from Louis Vuitton.

After exiting the museum, she boards a hot air balloon which proceeds to rise above the city, leaving her unidentified pursuer stranded below, and stowing the letter in her trusty handbag.

Shot by Inez & Vinoodh, the TV campaign is being rolled out globally as part of Louis Vuitton’s efforts to branch out from its usual high-end target market.

Louis Vuitton was founded in Paris in 1854.