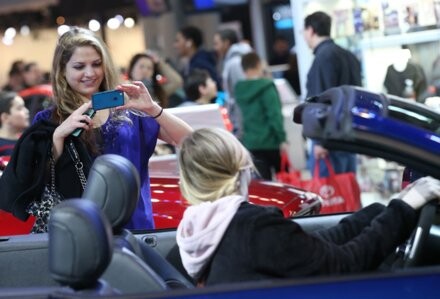 A number of luxury car brands are currently in Manhattan showcasing their latest launches at the 2015 New York Auto Show, which kicked off yesterday.

Tens of thousands of car enthusiasts, key industry figures and global media are currently in the Big Apple for the event, which has grown to become one of the most anticipated on the automobile calendar

Among the new high-end models being unveiled are a number of next generation cars, including the latest Porsche Boxter Spyder and Jaguar XF, along with the new Aston Martin Vulcan and Mercedes AMG GT S.

One of the most eagerly awaited releases has been the McLaren 570S Coupé, the first in McLaren's Sports Series, which boasts a twin-turbocharged 3.8-litre V8 engine, enabling a top speed of 204mph and a 0-62mph time of 3.2 seconds.

Concept cars have also been on the agenda in New York, most notably the Lincoln Continental. The roomy sedan features a revamped grille and a new 3.0-litre EcoBoost engine created exclusively for Lincoln, as well as luxurious touches including seats that cushion each leg individually.