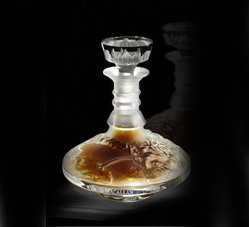 A special rare blend of the The Macallan’s single malt whisky sold for $460,000 in 2010 has been officially recognised as the world’s most expensive whisky sold at auction.

The accolade follows verification by the Guinness World Records committee which confirmed that the sale of The Macallan’s 64 Year Old in Lalique, Cire Perdue at a Sotheby’s auction in New York two years ago was indeed a world record breaker.

The single malt Scotch whisky is said to be the oldest and rarest of all The Macallan’s whiskys and is housed in an equally rare Lalique crystal decanter.

David Cox, Director of Fine and Rare Whiskies for The Macallan, said: “We are absolutely thrilled to have been awarded the Guinness World Record for the most expensive whisky sold at auction.

“This major accolade from such a world-renowned and respected organisation, proves once and for all that The Macallan is the world record holder.”

The historic auction took place in New York in November 2010 and was the culmination of a 12-city world tour of the Lalique decanter.

All proceeds from the auction were donated to charity: water, an organisation that provides access to clean, safe drinking water to people in developing nations.