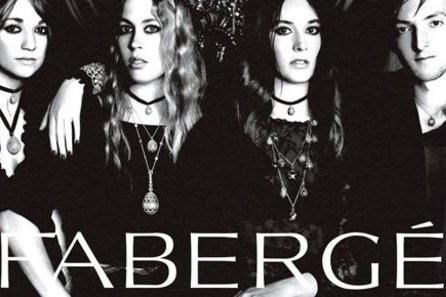 The idea behind the campaign was to capture the spirit and personality of youth by shooting real young people interacting with their friends. Josh Faberge, a young Faberge descendant with his own unique sense of style, was chosen to model along with three of his contemporaries – Mélanie de Pouqueville, Nina Flohr and Sophia Flohr.

Katharina Flohr, Fabergé Creative and Managing Director, said: “We wanted to celebrate ‘la jeunesse doree’ with this campaign and make Faberge relevant to a younger audience. Josh Faberge, whose mother Sarah Faberge heads up our Faberge Heritage Council, was an obvious starting point for us.

“We invited Josh and his friends to discover Faberge for themselves, engaging with the jewellery, mixing it up and layering the pendants however they like. The result is a compelling image that tells the story of a new generation reinterpreting Faberge for their contemporaries.”

The new black and white visuals will run in Spring issues of selective media publications in key international markets.