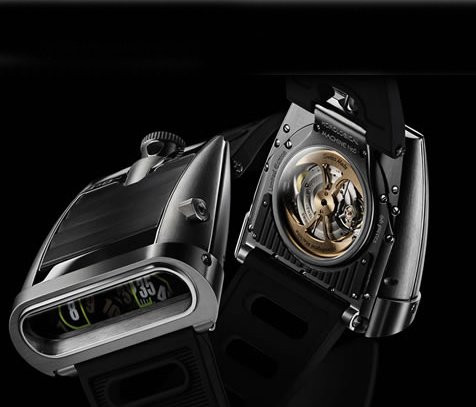 Bringing the world of cars and watches together in typically inventive fashion, watch brand MB&F have created a new timepiece inspired by classic automobiles from the 1970s.

Limited to just 66 pieces, all in zirconium, the HM5 ‘On the Road’ watch draws on details and bodywork of cars from the era, including their chassis, rear flaps, exhaust ports and dashboard.

With a nod to the instrument panel on an early 70s speedster, the HM5’s display shows the hours and minutes in an mph/rpm style, whilst the watch’s louvres are inspired by the decade’s low-slung supercars. The louvres on the HM5 are opened and closed by a slide set into the side of the case, and are used to changes the dial’s light intensity.

Other notable features include the watch’s combination of an automatic movement with an optical-grade sapphire prism, which reflects light 90 degrees and magnifies vertically.