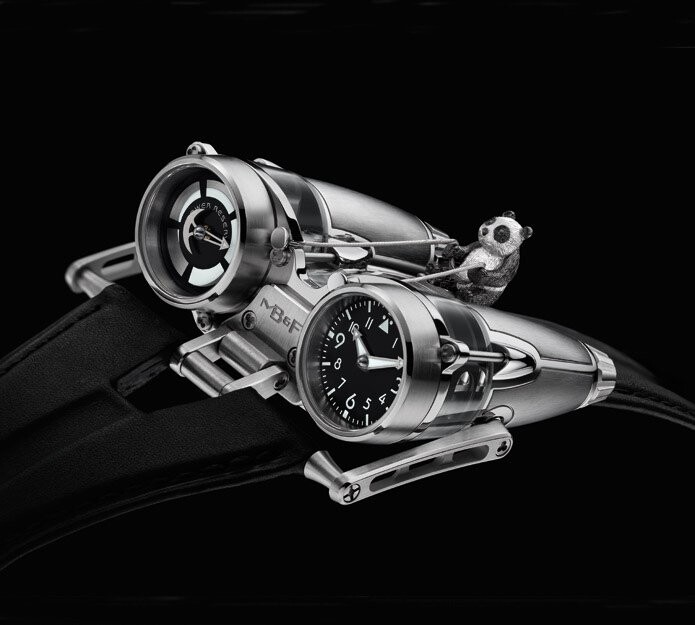 Swiss Watchmaker MB&F are set to launch a unique timepiece inspired by the traditional children’s dream of being able to fly.

The HM4 Only Watch, which will be unveiled at a charity event in Monaco in September, features a miniature 18 karat gold flying panda bear piloting a space-age HM4 jet. It was created as part of a collaboration with Chinese artist, Huang Hankang.

Mr Huang says he was attracted by the challenge of an artistic medium he had not considered before – or even knew existed.

“It comes from unfettered imagination, just like my paintings.”

Mr Huang initially painted a panda bear flying on top of an HM4, before MB&F set about transforming the painting into a horological expression. Huang’s original painting accompanies the HM4 Only Watch.

Other notable features of the watch include a Grade 5 titanium and sapphire case, a black hand-stitched calfskin strap with a titanium/white gold custom-designed deployment buckle, a three-dimenstional horological engine, and a power reserve of 72 hours.

The timepiece boasts a total of five sapphire crystals: two for the dials, two for the display panels and one for the central case section.

Under the patronage of HSH Prince Albert II of Monaco, The Only Watch charity auction is designed to raise money for research into duchenne muscular dystrophy. The auction is held every two years and brings together the cream of Switzerland’s haute horlogerie watchmakers.