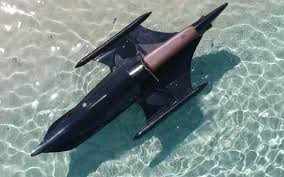 Meet the Mantra: A Streamlined Jet Ski from the Future

An ambitious team of boating experts has created a futuristic looking winged watercraft designed to race across open waters as incredible speeds.

Dubbed the Mantra, the streamlined vessel was entirely handmade and is decked out in striking black paintwork that helps make it look like something from a Star Wars movie.

It is the brainchild of an international team under the banner of Trydent Boats, which includes a race boat expert from the Philippines, an Australian entrepreneur, and an Italian mechanical engineer who has previously designed components for Ducati

According to its makers, the aesthetics of the Mantra were inspired by vintage cars and Filipino racing boats “Bancarera.”

Furthermore, its trimaran wings have been designed to provide hydrodynamic lift at high speeds, along with making the craft extremely stable, which not only makes it easy to ride but also tons of fun.

As for performance, the Mantra can hit a top speed of 50mph and is also capable of “drift”-style cornering. It is powered by Honda’s GX390 Mega Marine engine which can be activated by pressing a “start” button on the retro-styled instrument console.

The Trydent Mantra will be available to order soon through IndieGOGO, with an early-bird pricing of around $2,500.