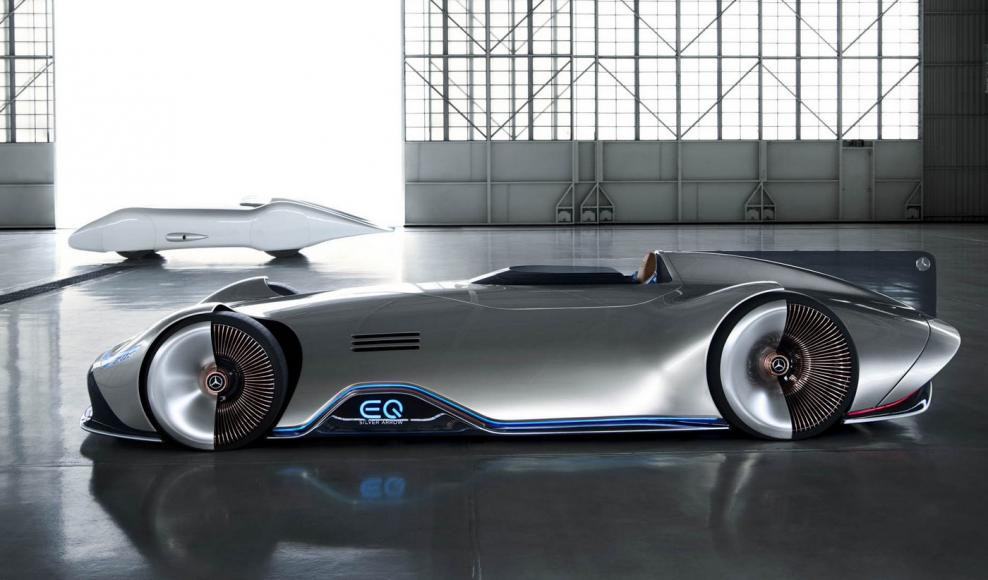 The concept has been built as a homage to the automaker’s original W 125 race car, which etched its name in automotive history by clocking a top speed of 268 mph over the flying kilometre back in 1938. The record stood for 79 years and was only broken last year by a Koenigsegg Agera RS.

Just like the original race car from the 1930s, the concept is a single-seater with a central driving position, but instead of a huge 12-cylinder engine, the EQ Silver Arrow is all-electric.

The concept is powered by an 80-kilowatt-hour battery pack and churns out 738 horsepower. Similar to the W 125 race car, the EQ Silver Arrow is long and thin measuring more than 17 feet long but just 3 feet deep.

The Alubeam Silver paint pays tribute to the colour of the classic Silver Arrows race cars and is highlighted by LED lighting strips that run across the car’s body. The smooth carbon fibre body has been designed to improve performance.

Metallic covers hide part of the 24-inch wheels which have an impressive 168-spoke design. The canopy of the car is mounted on hydraulic struts and has the steering wheel attached on it.

The leather wrapped steering wheel has a button that gives the option of masking the noise of the electric motors with a synthetic soundtrack of either a F1 car or a V8 AMG GT. Mercedes has also incorporated a small video game inside the cockpit.

The concept was showcased at the Pebble Beach Concours d’Elegance on 26 August.