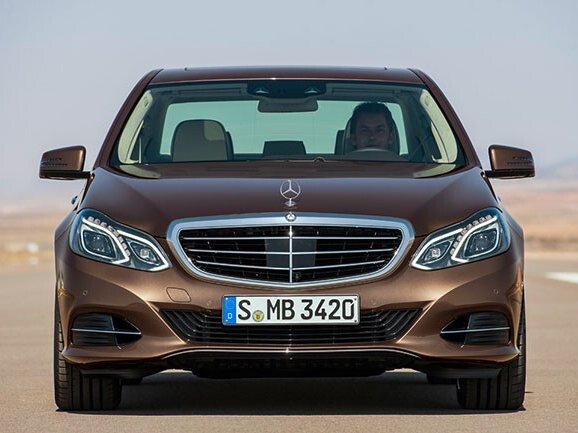 Mercedes-Benz has unveiled its new 2014 model year E-Class four years after the concept was first showcased.

Available in both a standard “Luxury” version and an augmented “Sport” version, the new E-Class offers several nods to its predecessors whilst including several technological advancements.

The visual tweaks have been relatively subtle, with the “Luxury” version boasting a familiar grill but with an altered shape with the addition of sharper corners and a slightly more pronounced snout, whilst the “Sport” version has an entirely new grill fitted with an integral three-pointed star.

As for performance, the new E-Class is available with either petrol, diesel or hybrid engine models, plus as a 4-wheel drive. The 2.1-liter 4-cylinder turbodiesel engine is capable of 190 hp whilst the Sedan features a direct-injection 3.5-liter V6e engine that churns out 302 hp.

The Hybrid Sedan, meanwhile, features an electric motor and direct-injection 3.5-liter V6 engine capable of 27 hp and 302 hp respectively, whilst the most powerful model in the new range is the Sport Sedan, boasting a turbocharged direct-injection 5.5-liter V8 engine pumping out 402 hp.

In terms of technology, the new E-Class features several newly-developed driver aid functions, including the Stereo Multi-Purpose Camera, which is able to detect vehicles driving in front, oncoming or crossing, as well as to identify pedestrians, and evaluate this three-dimensional visual information to determine their speed and position.

The new E-Class range will go on sale in early 2013, with pricing set to be announced at the Detroit Auto Show in January.