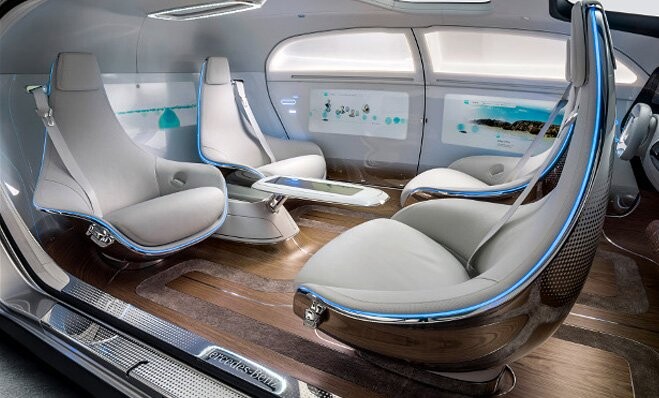 The once unimaginable idea of self-driving cars on our roads is edging ever nearer to reality.

With the world’s major car manufacturers and technology companies now well and truly on board, the latest to step up to the plate is Mercedes who have created an eye-catching self-driving concept car called the Mercedes Benz F 015 Luxury in Motion

Unveiled at the 2015 CES technology show in Las Vegas, the concept car is billed as an autonomous pod with a spacious interior capable of transporting passengers to their destination in the comfort of a homely living room.

Mercedes believes that as autonomous cars become the norm over the coming years their interiors will evolve to more closely reflect our living spaces.

Notable features include swivelling seats that enable the front and back passengers to face one another, touch screens running along the front and side panels and gesture and eye-tracking devices.

The F 015 concept car also comes with a manual option of being driven by humans, with large LED fields located at the front and rear of the vehicle indicating which driving mode the car is in, turning blue when autonomous and white when manual.

The F 015 concept is also environmentally conscious, boasting an F-Cell plug-in hybrid system enabling it to car travel 684 miles on a single charge.

On December 22, 2014, technology giants Google unveiled a fully functioning prototype of their driverless car, with plans to test it on San Francisco Bay Area roads early this year.