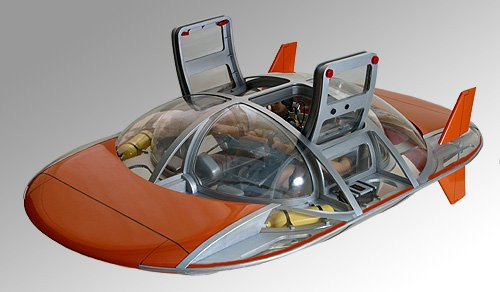 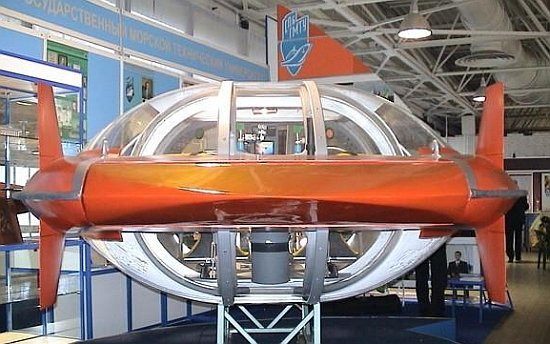 A new concept pedal power submarine has been designed by Russian company MIT and is set to revolutionize the world of underwater exploration.

One of the most striking problems behind the design was power: a submarine requires a propulsion capacity of 2.5-5kW while the average person struggles to generate a propulsion capacity greater than .2-.4kW while pedalling. By making use of an innovative design scheme and taking advantage of a natural phenomenon known as the Coanda Effect, MIT was able to solve the problem.

The Coanda Effect occurs when a jet flow attaches itself to a nearby surface and remains attached even when the surface curves away from the initial direction of the jet flow: think of a stream of water running over the back of a spoon. MIT's design uses rotor-jet propellers to direct an air jet through a flat slot onto the surface of the vehicle, where it adheres and generates thrust. The disc shape of the underwater vehicle (UV) helps to create a vacuum on the hull to provide increased draught. This enables the average person to generate the necessary underwater speed of 2-3 knots for two to four hours.

MIT has also been able to simplify the construction of the UV: it can be transported on the back of a car trailer and measures 3.5 metres long, 1.2 metres high and 2 metres wide. Weighing between 1.5-2 tons out of the water, the UV can reach speeds of 2-5 knots on the surface and 2-3 knots while under water, at depths up to 30 metres. The UV also enjoys a high degree of manoeuvrability that allows it to travel forwards, backwards, up and down as well as rotate about its vertical axis. Passenger will love the views as the UV's body is almost entirely transparent.

MIT anticipates that the UV will find attract interest for scientific research, underwater filming, technical surveys of underwater structures and underwater rescue. MIT plans to offer an optional low-power combined electric drive for those who don't care to pedal.

MIT is currently seeking investors to fund the construction of a prototype UV and, once in production, MIT expect to produce 10,000 vehicles per year.