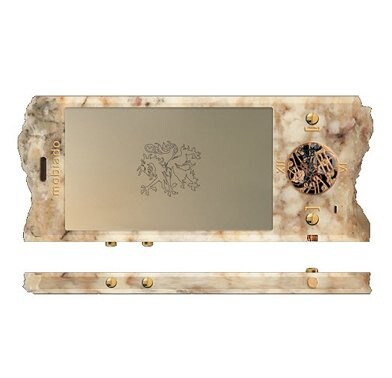 Luxury mobile design company Mobiado have designed what is being billed as the first ever mobile device made from marble.

The Grand Touch Executive, which was released last week by the Canadian based firm, is based on the CPT001 concept that Moviado unveiled in 2010.

Two years in development, the phone is available in a range of materials, including a hybrid stone material featuring either marble or granite, as well as a trio of woods: ebony, burl and cocobolo.

The phone also contains a sapphire touchscreen, along with golden screws and other luxury components, as well as being Mobiado’s first luxury handset to use a SIM card key mechanism.

Other notable functions on the phone include a 5MP camera with LED flash, MP3/WAV/eAAC+/AC3 player, 1 GB RAM, 16GB of storage, integrated A-GPS and standard bluetooth and WiFi features.

Whilst Mobiado has officially released the phone, its retail price has not yet been openly announced.