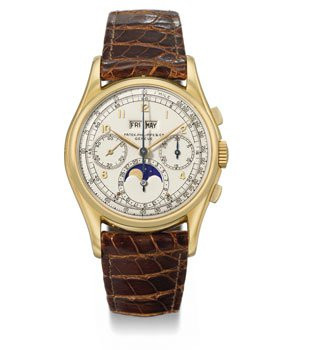 An extremely rare Gold Patek Phillipe perpetual calendar chronograph wristwatch has been sold in a record auction for $5.86 million.

Made in 1943, the rare Patek Phillipe watch doubled its estimated value of $2.5 million after being sold by Christies Watch Department in Geneva. The watch is one of only two ‘complicated references 1527’ ever made by the world-famous watchmakers.

Aurel Becs, the co-head of Christies watch department named it the “Mona Lisa of Watches,” which came to inspire an entire line of Patek Phillipe watches after it.

The watch in question is believed to have been bought by an anonymous Swiss museum for $5.86 million, taking the fine time piece away from private ownership. Reports suggest it was the same Swiss museum which houses the second Gold Patek Phillipe Complicated References 1527 time piece.