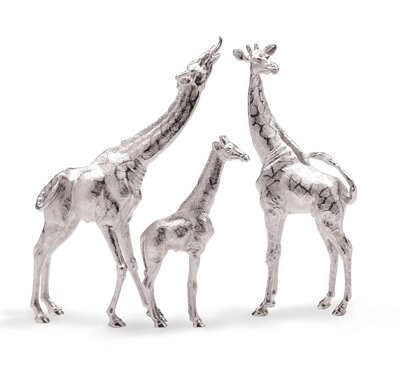 The Zimbabwe-born jeweller and silversmith, who owns a flagship store on London's Fulham Road, has designed a number of signature pieces including such exotic creations as sterling silver ‘crocodile’ belt buckles, sterling silver ‘elephant hair’ bangles, and whimsical ‘elephant and tortoise’ cigar ashtrays.

The pieces, which draw on the landscape, flora and fauna of Africa, have been touring the UK and beyond as part of an exhibition called African Luxury House. So far it has been seen at such varying locations as royal palaces to remote African ranch homesteads.

“And then you think of Africa, the one continent with so much mystique and intrigue and romance, and it has nothing to offer the world of luxury.

“It’s our mission to create the definitive African luxury brand and what a fabulously exciting opportunity that is.”

In addition to the items available for purchase, Mavros has also undertaken numerous private commissions, fashioning everything from Giraffe and Acacia Tree Candelabra to a set of flying grouse Double magnum Wine Coasters.

Admirers and customers of Mavros are said to include The King of Spain, Denzel Washington, J.K.Rowling and Barack Obama.