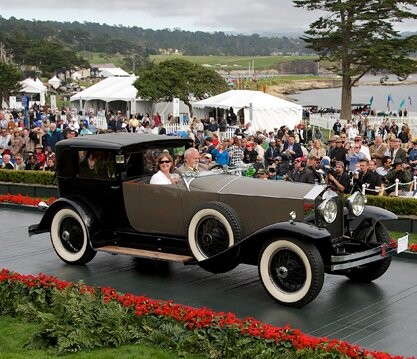 One of the world’s most prestigious car shows takes place next weekend in the exclusive setting of Pebble Beach, California.

The luxurious coastal resort, famous for its array of world class golf courses, has hosted its annual Concours d’Elegance since 1950, where more than 200 beautiful, precious and iconic classic cars and motorcycles gather for a celebration of automotive history.

Each year the show tends to focus on a particular marque, but this year gives cause for a double celebration. Exactly 125 years ago, Karl Benz received the first patent for a gas-propelled car (the three-wheeled Benz Patent Motorwagen). Later that same year, Gottlieb Daimler mounted an engine on a four-wheeled vehicle for the first time.

Due to their trail-blazing efforts 125 years ago, the company that we now know as Mercedes-Benz is set to play a major role in this year’s proceedings. The German car-maker will bring several of its rare models to Pebble Beach, including the 120 PS racing car, the 1928 SSK by Ferdinand Porsche, and a replica of the famous Blitzen Benz – the first petrol vehicle to pass the 200 km/h mark.

Other notable cars set to appear at this year’s show include early Rolls-Royce Silver Ghosts, a Stutz Centennial and a Ferrari 250 GTO.

Amongst the popular features of the Concourse d’Elegance are independently-judged awards for cars attending the show based on factors such as authenticity, function, history and style.

“The success of everything we do really hinges on selecting the best cars and motorcycles to compete here at Pebble Beach,” said Concours Chairman Sandra Button.

In addition to the car competition, there is also an auction, a classic car tour, and an automotive art exhibit.