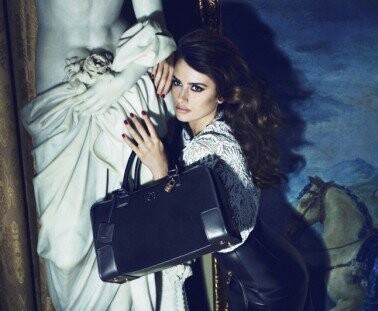 In the campaign, the Spanish screen star is seen leaning against a mirror clutching a lavish coral coloured Paseo bag. The advert was shot in the opulent 17th century Palacio Marqués de Villafranca in the Spanish capital of Madrid.

Cruz, who has starred in hit movies including “Vanilla Sky”, “Volver” and “Vicky Cristina Barcelona”, also features posing alongside a classical statue and holding a classic Loewe Amazon handbag in black.

The campaign was shot by renowned fashion photographers Mer Alas and Marcus Piggott, known for their portraits of sophisticated, powerful women.

Speaking about the adverts, Cruz said: “Loewe is an international brand proud of its Spanish roots and with a rich history.

“Its collections are made by Spanish master artisans and I have always admired their work. I feel fortunate to be a part of this project.”

The Loewe fashion brand was founded by Enrique Loewe Roessberg in 1846.