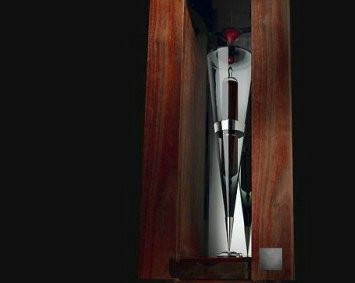 The Australian winery Penfolds has unveiled 12 incredibly styled bottles of a rare vintage last week, advertised for sale at an incredible $168,000 Australian Dollars ($170,350) each.

The hand-blown “ampoule” which holds the vintage wine is a unique vessel which was designed to provide the ideal environments for the liquor, and this is suspended inside a bespoke glass container which sits inside a wooden cabinet.

“It is our understanding this is one of the most expensive Australian wines released in this unique format,” said Penfolds spokeswoman Ildi Ireland.

However, this is not just any design, the buyer will have to call out an expert from Penfold’s wine-manking team who is the only individual with enough training to cork the coveted bottle.

The wine expert will essentially travel to wherever the customer is to remove the ampoule from its glass casing and open the bottle using a specially-designed device.

“The wine contained within the ampoule, first released in the 1950s, holds a particular significance among generations of Australian and international wine collectors,” Penfolds said in a statement.

The wine, a 2004 Kalimna Block 42 Cabernet Sauvignon, is a rare single-vineyard wine which is only released in stellar vintages. The Block 42 vineyard, planted in the mid-1880s, is in South Australia’s Barossa Valley and Penfolds said it is thought to have some of the oldest continuously-producing Cabernet Sauvignon vines in the world.

“There is something really magical about the 2004 Block 42 Kalimna Cabernet,” said Penfolds chief winemaker Peter Gago. “It has an ethereal dimension and a saturated blackness on the palate, it’s extraordinarily perfumed with layer upon layer of flavour.”

Four artisans were commissioned to produce the ampoule and casings which feature fixtures made from precious metals that help anchor the glass sculpture to the jarrah wood box.