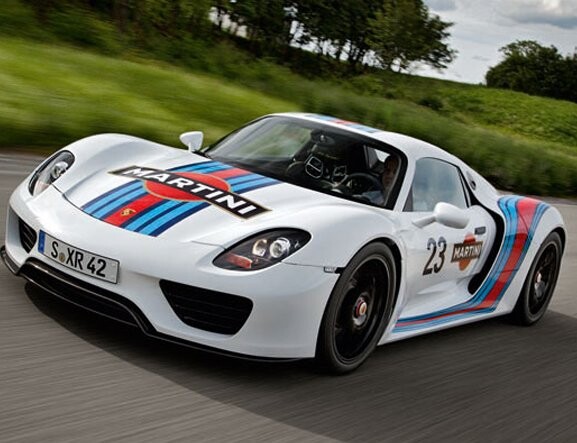 The Porsche 918 Spyder Martini concept, first unveiled at the 2010 Geneva Auto Show, has moved one step closer to reality after the German car brand announced its latest driving trials.

Designed as a tribute to the legendary Martini Racing Team of the late 60s and 70s, the 918 Spyder concept has been undergoing circuit laps at the Nürburgring-Nordschleife circuit in Germany.

The car, which is kitted out in the distinctive Martini Racing colours synonymous with historic Porsche race cars, combines a high-performance internal combustion engine with electric motors on the rear and front axles to deliver an impressive 770 hp.

It boasts a monocoque constructed from carbon fibre reinforced polymer, which reduces vehicle weight, whilst other notable features include fully variable aerodynamics, adaptive rear axle steering and a ‘top pipes’ exhaust system which routes the exhaust upwards at the rear of the car.

Martini was the official partner of the Porsche factoryteam between 1973 and 1978, scoring several prestigious wins on the racing circuit and gaining an iconic status across the world.