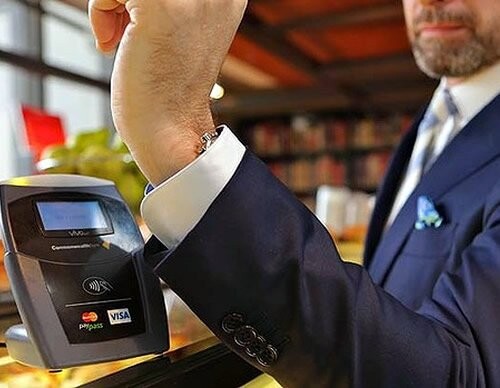 Australian tailor MJ Bale have teamed up with Heritage bank to create a prototype for a high-tech suit featuring a cashless payment chip.

The Power Suit, which is made using Australian merino wool, uses Visa’s payWave system as a payment gateway which connects to Heritage Bank’s mobile wallet.

The chip is built into the sleeve of the suit and uses the same near field communication (NFC) technology found in NFC-enabled smartphones. To use it to pay for items, the wearer simply taps their wrist on the reader at the point-of-sale (POS) payment terminal.

As well as making payments, users can also top up their mobile wallet with a balance from their bank’s debit or credit card.

So far 11 prototype suits have been created in order to undergo feasibility tests and research into potential market demand.

The term ‘power suit’ was originally used to describe a particular type of office suit commonly associated with the 1980s and characterised by sharp cuts, wide shoulder pads and a stiff rigidity.