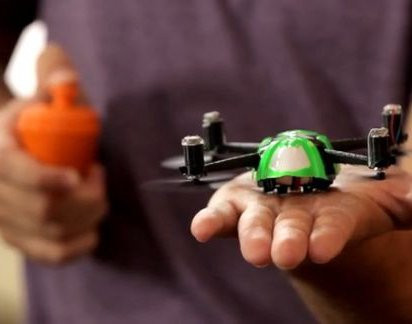 As technological potential has evolved in recent years, we have seen a proliferation of toys that take the gaming experience off of a video screen and into the physical world.

The latest futuristic plaything to do just that is the palm-sized NanoQ mini quadcopter by Minneapoli-based high tech gaming design company QFO Labs.

The first product in the brand’s Real-Life, 3-D Gaming Series, the NanoQ is flown wirelessly with a Mimix Tilt-to-Fly controller by simply tilting your wrist. Weighing 35 grams, it can stay in the air for up to ten minutes on its rechargeable LiPo batteries and has a range of 100 feet.

Whilst other products on the market that have tried two-player aerial gaming require you buy an “A” and “B” version helicopter just to fly in the same room, QFO Labs’ system allows you fly any number of copters and choose teams with the push of a button..

Each NanoQ is equipped with an IR “photon cannon” and an IR sensor pod. By pulling the trigger on the Mimix, users unleash photon “lasers” in an attempt to hit the sensor pad on their opponent’s NanoQ enough times to force it down.

Brad Pedersen, CEO of QFO Labs, said: “The idea to break the 2D gaming barrier with real-life 3D aerial laser games has been with us for nearly a decade, but the technology required to create that experience had always been too expensive.

“Now with the low cost of motion sensors due to the proliferation of smartphones, we have finally achieved our vision of a quality real-life gaming system at an affordable price.”