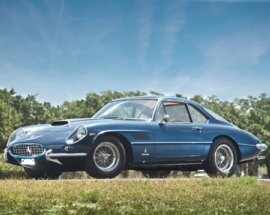 RM Auctions, the world’s largest collector car auction house, has unveiled some of the stunning investment-quality automobiles that will go under the hammer during the annual Concorso d’Eleganza Villa d’Este weekend in Cernobbio, Italy in May.

Returning to the spectacular Villa Erba on the shores of Lake Como, the sale follows RM Auction’s impressive debut during the Concorso weekend in 2011, which yielded more than €23 million in sales.

This year’s auction is set to continue the momentum, with a host of highly sought-after cars on offer, including a 1962 Ferrari 400 Superamerica Coupe, a 1947 Cisitalia 202 MM ‘Nuvolari’ Spider, and a 1930 Bugatti Type 46 Superprofile Coupe.

Other notable highlights include a 1929 Rolls-Royce Phantom I Open Tourer, which served as the official transport for the then Princess Elizabeth during her state visit to Kenya in 1952.

Max Girardo, Managing Director of RM Europe, said: “It will be wonderful to be back at Lake Como and supporting the Concorso d’Eleganza with what promises to be a truly spectacular selection of cars.

“The Concorso prides itself on being the pinnacle of taste and exclusivity and that is obviously the same ethos underpinning how RM conducts this auction and the cars offered within it.”