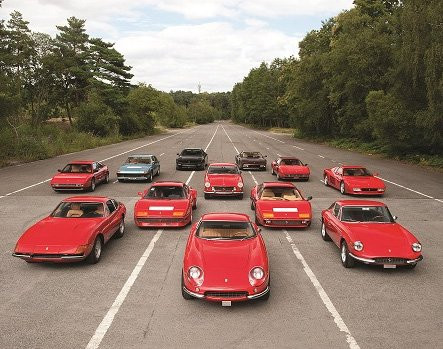 Canadian auction giants RM Auctions are preparing for the 2014 edition of their prestigious London sale in September, which this year features 20 classic Ferraris spanning more than three decades of production

Held in partnership with the Concours of Elegance at the historic Hampton Court Palace in the south of England, the sale boasts almost a century of automotive history.

Twelve of the twenty Ferraris to go under the hammer come from a single private collection in Switzerland and include a 1966 275 GTB, chassis 8199 featuring a long-nosed, alloy-bodied configuration and is estimated to sell for between £1.9 and £2.2 million.

As well as the array of Ferraris, RM Auctions will also present three pre-war Bugattis at the London sale, including a 1920 Bugatti Type 13 ‘Brescia’, chassis 981, and a 1937 Type 57C with Stelvio coachwork by Gangloff.

Max Girardo, Managing Director at RM Auctions, Europe, said: “RM is the world’s leading seller of classic Ferraris, and it is fantastic to be able to feature such a broad selection of the marque’s finest road cars at our London sale.

“We have a strong reputation for quality, and it’s important to note that the Ferraris on offer are of a particularly high standard, with many being incredibly low mileage examples and presented in almost ‘as new’ condition. The market loves the best, and we are certainly offering the best in London.”

Now in its ninth year, RM Auction’s London sale is established as one of Europe’s largest and most prestigious collector car auctions.