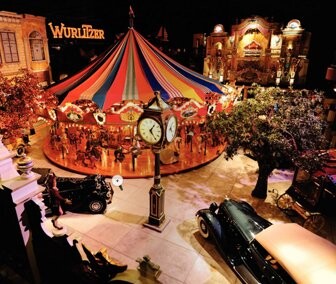 One of the world’s most extraordinary private collections, encompassing everything from mechanical musical instruments to rare automobiles, is to be sold at auction in Boca Raton, Florida later this month.

Held by RM Auctions in association with Sotheby’s, the sale is the result of over five decades of collecting by brothers Bob and Paul Milhous.

In 1978 the pair turned their collection into a private museum – the Milhous Museum – which has occasionally been opened up to visitors as well as playing host to several charitable events over the years. The up-coming auction will be the final time that the museum opens its doors.

Amongst the items to go under the hammer will be over 100 of the world’s most desirable fair, theatre and dance organs as well as the largest compilation of major orchestrion pieces ever offered at auction.

Automotive highlights will include a rare 1912 Oldsmobile Limited Tourabout, a 1939 Lagonda V-12 Rapide Sports Roadster once owned by actor Robert Montgomery, and a revolutionary 1949 Rounds Rocket Indianapolis Racing Car believed to have once belonged to business magnate Howard Hughes.

Rob Myers, Chairman & Founder, RM Auctions, said: “The Milhous Collection is one of the finest of its kind anywhere in the world, with a strong emphasis on rarity, authenticity and superior quality.

“Never before has such a wonderful assortment of mechanical musical instruments, motor cars and collectibles been offered to the public in one location. Compiled by connoisseurs for connoisseurs, the sale presents an unrepeatable, once-in-a-lifetime ownership opportunity for discriminating collectors.”

The auction will be held during the same weekend as the Boca Raton Concours d’Elegance – one of the world’s most prestigious vintage car shows.