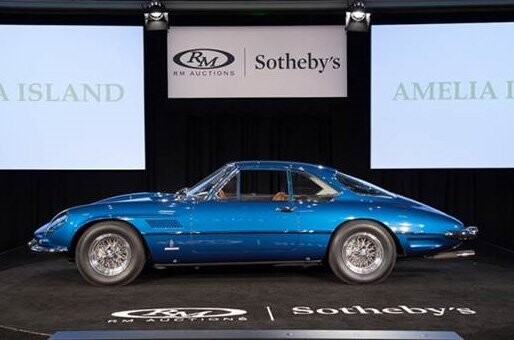 RM Sotheby’s, the official auction house of the Amelia Island Concours d’Elegance, celebrated its 18th anniversary sale in Amelia Island this weekend, with $38.6 million in sales.

Led by a series of best-of-category automobiles, the four-and-a-half hour sale attracted a standing room only crowd, with bidders hailing from 20 countries and with 89 percent of all lots sold.

The top seller was a 1962 Ferrari 400 Superamerica LWB Coupe Aerodinamico which surpassed estimates by selling for $4.4 million to set new world record price for a 400 Superamerica Coupe at auction.

Another highlight was the sale of a 1954 Bentley R-Type Continental Fastback Sports Saloon, which fetched $1.82 million.

Speaking about the high-profile auction, Gord Duff of RM Sotheby’s said: “We had another great auction here at Amelia Island, with a solid sell-through rate of 89 percent and numerous cars from across all segments of the market exceeding estimate and achieving record prices.

“The solid result was driven by active participation from many of America's leading collectors, as well bidders new to the hobby. Results such as the $4.4 million paid for the 1962 Ferrari 400 Superamerica, the $1.2 million 1932 Packard Twin Six Coupe Roadster, and the $2 million 2014 Pagani Huayra show enduring appeal and depth of demand for the best examples from top marques.

“The fact that yesterday’s results represent one of our strongest performances at Amelia Island to date illustrates a continued healthy market.”

RM Sotheby’s continues its global calendar of events in Monaco in May during the Monaco Grand Prix weekend.