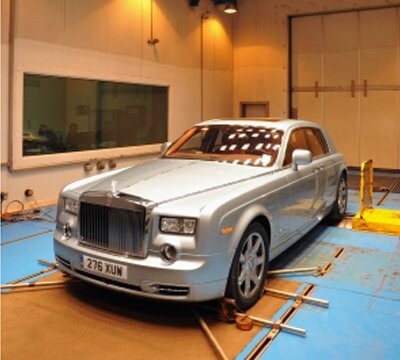 An all-electric Rolls-Royce concept car is to embark on a worldwide tour as part of viability and performance tests.

The 102EX Electric Phantom will begin the tour in Asia later this month before making its way across the United States, taking in Los Angeles, Florida, and New York.

During the tour, the car will be showcased at the Los Angeles Motor Show and the world-renowned Art Basel exhibition in Miami, Florida.

The Electric Phantom includes what Rolls-Royce claims is the largest battery pack ever put into a car, allowing it to travel about 125 miles on one battery charge.

Inside the vehicle, the carpets have been stripped out to give it a Chestnut leather look in the footwell, whilst retaining sumptuous leather armchairs. Atlantic Chrome paint work comprises 18 layers of nano-sized particles, whilst the normal silver Spirit of Ecstasy is replaced with a polycarbonate version that glows blue courtesy of LED lights.

Recently the iconic British car brand has been putting the electric prototype through a series of tests, including a temperature battery test, to find out how well the car would operate in extreme weather conditions.

Of particular interest was how the car would handle in the extreme heat and low humidity of the Middle-East, where Rolls-Royce has more than one tenth of its showrooms.