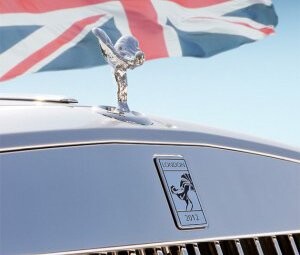 Amid the music and medals taking centre stage in last night’s Olympics Closing Ceremony in London, three Rolls-Royce Phantoms had their own fleeting but spectacular moment in the spotlight.

As they crossed the auditorium during the ceremony’s ‘A Symphony of British Music’ section, one the cars dropped its retractable roof to reveal British singer Jessie J, who proceeded to entertain the crowd with a live performance from the back of the car as it circled the stadium.

Finished in gleaming English White, the unique Phantoms feature the famous Spirit of Ecstasy on the new grille badge, with Union Flag replacing the traditional flowing gown of the Graceful Little Goddess.

Furthermore, the badges are complemented by unique tread plates identifying each car as ‘One of Three’.

Torsten Müller-Ötvösm Chief Executive at Rolls-Royce, said: “I am delighted that Rolls-Royce Motor Cars was invited to take part in celebrating the success of the Games and it is appropriate that we should recognise this occasion with a fitting tribute.

“These unique cars were hand built at the Home of Rolls Royce at Goodwood by our dedicated and passionate workforce and the whole team can take great pride in their part in making history for our company.”

The Closing Ceremony was watched by more than 26 million people in the UK alone, and millions more around the world.