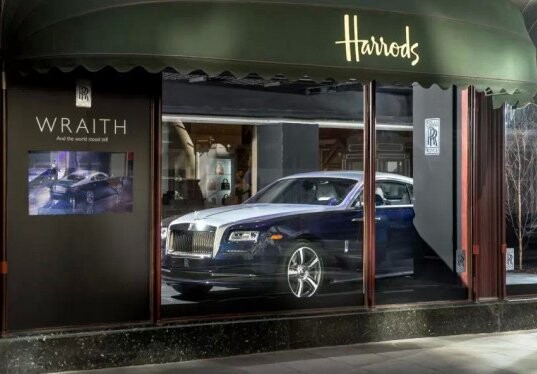 The new Rolls-Royce Wraith, which was unveiled at the Geneva Motor Show in March, is currently taking centre stage in the shop window at prestigious London department store Harrods.

Billed as the British brand’s most powerful model ever, the Wraith on display is two-toned with a Midnight Sapphire paintwork and upper tone in Cassiopeia Silver. Artic White and Navy Blue Leather covers the interiors with the Rolls-Royce initials ‘RR’ embroidered on the headrests in Navy Blue.

A two-door coupe version of the Rolls-Royce Ghost, the new Wraith revives the name of the iconic Rolls-Royce first produced in the 1930s. The car’s 6.6-litre V12 engine produces 624bhp, enabling it to go from 0-60mph in just 4.4 seconds and to reach a top speed of 155mph.

Harrods’ window display – which is a magnet for London visitors and luxury consumers from around the world - has housed a number of ultra-exclusive products down the years, including a crystal tub from Baldi and a Lexus CT 200h.

Earlier this week Rolls-Royce CEO Torsten Muller-Otvos confirmed that a convertible version of the Wraith would also be built, though production is not expected before at least 2015.