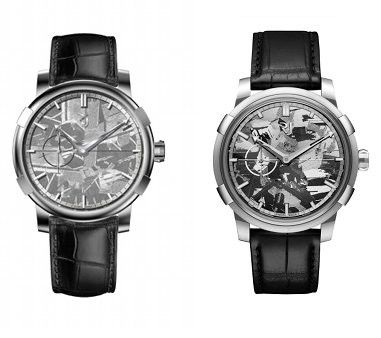 The ‘1969’ timepieces come in a lighter 43mm case and feature a vintage design, reflecting “a nostalgic and bygone era of thin, geometrical clean lines combined with colourful, animated dials”.

On the first version, Romain Jerome have crafted the dial with pieces from a meteorite brought directly from outer-space and formed within the solar nebula disk billions of years ago.

Romain Jerome have also found inspiration in space for the dials of the three other 1969 timepieces. Commonly referred to as “SI” in the periodic table, the brand has used silicon on the dials of the models. Silicium represents 90% of the Earth’s crust and is commonly used, once highly purified, as a semiconductor in most electronics today as well as in manufactured movements.

Presented in blue, grey and brown, this natural translucent and very fragile element is coloured using a special PVD process giving the colours a textured finish highlighting each bold detail of this natural element.

Echoing the 1969 meteorite, the blue and grey Silicon dials are also perfectly fitted in a satin-finished steel case whereas the infinity of space is featured with a brown dial integrated into a black PVD-coated steel case and bezel.

Romain Jerome was founded in Geneva, Switzerland in 2004. The brand has become renowned for its use of incredible natural materials and substances.