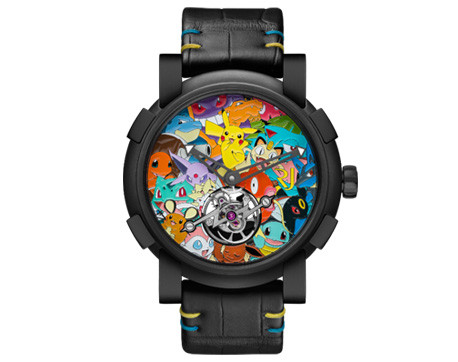 High-end Swiss watchmakers RJ-Romain Jerome have gained a reputation for pushing people’s nostalgic buttons in recent years. Among the watches they have produced include pieces that have paid tribute to childhood icons such as Super Mario and Pac-Man.

Now the brand has tapped into the more recent obsession with the Pokemon franchise, which first took the world by storm in the 1990s, by collaborating with The Pokémon Company International.

The partnership, which began last year, then resulted in the creation of a $20,000 limited 20-piece edition Pikachu watch and has now spawned a follow-up version which RJ describes as “the perfect alchemy between a prestigious horological complication and the emblem of the millennials.”

This one-off watch’s centrepiece is an intricate tourbillon along with a lightning bolt-shaped tourbillon bridge along with a Pikachu shaped oscillating weight. It comes in an all-black 48mm case and is paired with a black alligator strap that is enhanced with yellow and blue stitching.

Founded in Geneva, Switzerland in 2004, Romain Jerome has become renowned for its use of natural materials and substances. Last May, the brand updated its range of Skylab timepieces with two new limited edition versions, each featuring steel unearthed from the Apollo 11 spacecraft placed inside the watches’ bezels.