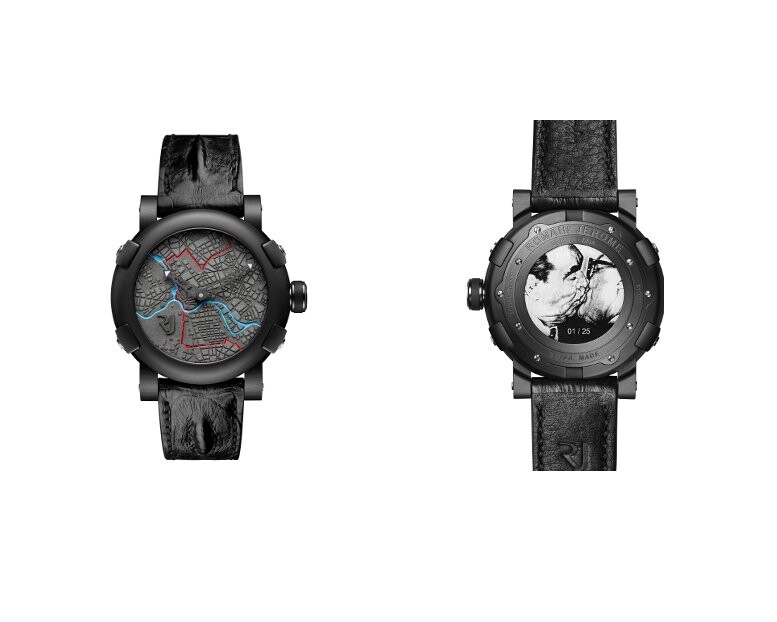 Swiss luxury watchmakers Romain Jerome have created a striking new limited edition timepiece to celebrate the 25 years since the fall of the Berlin Wall.

Housed in a 46mm black PVD-coated steel case and black ceramic bezel, the Berlin-DNA was designed in collaboration with The East Side Gallery, a 1.3km memorial in Berlin, and contains fragments of the wall incorporated inside the watch’s dial.

The grey dial also features a map of Berlin, with the route of the wall highlighted in red with a green Superluminova finish which lights up in the dark.

Manuel Emch, CEO of Romain Jerome, said: “The East Side Gallery embodies both a piece of art and a piece of history. This combination is unprecedented in today’s world. The Wall is a constant reminder of the passion and commitment behind the quest for people’s freedom, and translates the euphoria felt in the wake of the reunification.

“The images of people literally tearing into the Wall after decades of oppression has marked the minds of millions and has become Legendary. It’s exactly this type of Legend that inspires Romain Jerom. With this partnership, we want to set an example by preserving art and historical vestige.”

The back of the watch features one of the most famous paintings found on the Wall of the East Side Gallery, “The Brother kiss" of Russian artist Dmitri Vrubel. Inspired by a picture taken in 1979, “The Kiss” illustrates Soviet leader Leonid Brezhnev and East German President Erich Honnecker, kissing each other after Mr. Brezhnev’s speech during the 30th anniversary of the German Democratic Republic.

The Berlin-DNA by Romain Jerome is limited to just 25 pieces.