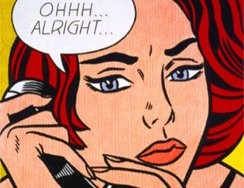 The painting created by Roy Lichtenstein in 1964 titled ‘Ohhh… Alright…” has been listed for sale at Christie’s Auction House in London and is expected to reach an astonishing £25 million.

Roy Lichtenstein was a pioneer in cutting-edge Pop Art, producing highly sought after paintings such as the 1964 piece “Ohhh… Alright…”, “Whaam!” and “Happy Tears” which went for around $35 million two years ago. “Ohhh… Alright…” is centred on a woman in distress, much like most of Lichtenstein’s highly acclaimed work.

Never auctioned before, “Ohhh… Alright…” is an iconic depiction of the 1960s, a testament to the wave of pop-culture that struck the world during the era. Lichtenstein’s work covers a wide portfolio of colourful and thoughtful comic-strip images which have been auctioned around the world to numerous owners of discerning tastes.

Casino-resort developer Steve Wynn is the contributor to the auction after buying it from a New York gallery a few years ago.