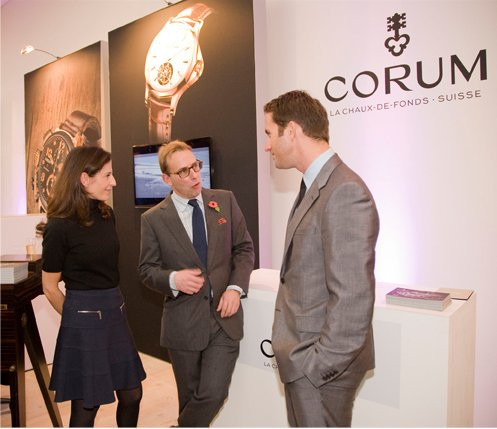 The 2012 edition of Salon QP, one of the world’s most prestigious watch fairs, came to a close on Saturday following three days of showcasing, bartering, celebrity appearances and all-round enjoyment of the latest in high-end watch design.

Taking place at the Saatchi Gallery in west London, over 50 leading watch brands were in attendance for the high-profile fair, along with thousands of watch enthusiasts, industry experts and luxury press.

Major established brands such as Hermès, Harry Winston, Bulgari and Vacheron Constantin were joined by independents and relative newcomers to the industry including Urwerk, MB&F, Schofield and Meridian, each presenting their latest collections in front of a captive audience.

Amongst the highlights were Vacheron Constantin’s Metiers d’Art piece, featuring a guilloche dial with an overlay of enamel, and a stunning marine chronometer designed as part of a collaboration between clock-makers Thomas Mercer and Superyacht designer Andrew Winch.

In addition to an array of horological offerings, the event also played host to a dedicated lifestyle section, featuring high-end audio equipment, jewellery and watch winders. Meanwhile luxury department store Harrods were on hand to offer visitors a range of watch servicing and repair facilities.

The fair was also graced by the presence of several celebrities, including Olympic sailing hero Ben Ainslie CBE, who was presented with a timepiece by Corum, as well as television adventurer and Bremont ambassador Charley Boorman.

On the final two days of the show, there was screenings of The Watchmaker’s Apprentice – a documentary about the life and work of the late Dr. George Daniels MBE, considered one of the greatest watchmakers of the last two centuries, and his protégé Roger W. Smith.

First held in 2009, Salon QP has rapidly grown into one of the most eagerly-anticipated events on the watch fair circuit.