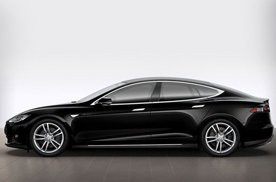 California-based electric car makers Tesla may be close to unveiling their own version of a self-driving car thanks to new software updates to the Tesla Model S, according to reports.

This original Autopilot feature offered several basic self-driving functions, such as being able to read speed signs and make lane changes, as well as automatic emergency braking and blind-spot warning.

The expected launch of the next Model S, with its new software, is anticipated to allow self-driving capability on the highway from on-ramp to off-ramp. It will allow the car to be summoned by its driver via smartphone, and instructed to park itself, when on private property.

“It is technically capable of going from parking lot to parking lot," Musk said. "But we won't be enabling that for users with this hardware suite, because we don't think it's likely to be safe in suburban neighbourhoods."

He added that while the self-driving technology was technically capable of handling urban areas, Tesla will disable the Autopilot in these situations, due to safety concerns.

Tesla Motors was founded in California in 2003 by business magnate, investor and inventor Elon Musk.