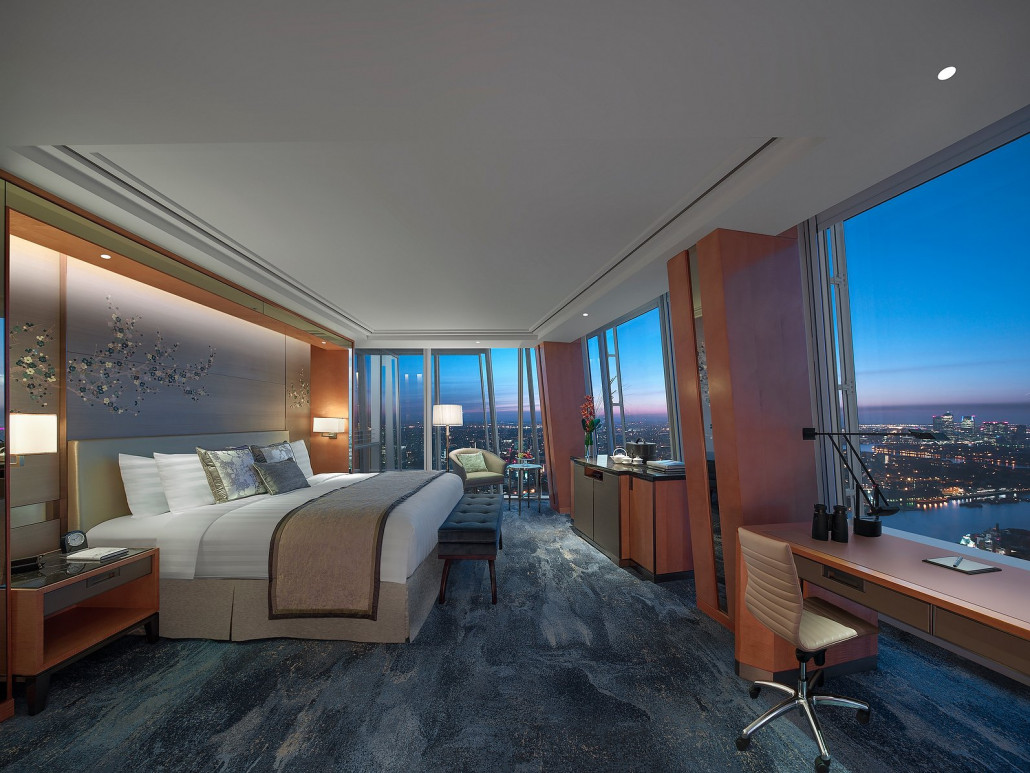 Shangri-La Hotel at The Shard, London

How can a hotel create the ultimate emotional experience for its guests? It is a question that has kept the hospitality industry up to its elbows in focus groups and brainstorming sessions for time-immemorial.

As it turns out, all you need to do is stick them on the upper levels of an 87-storey skyscraper with a triple aspect view over an iconic city, and it's job done.

This was just one thought that crossed my mind as I gazed out over the London skyline from the 48th Floor of the Shangri-La Hotel in London, housed within Renzo Piano’s iconic 1,016ft Shard tower which stands boldly – if not unanimously loved – as Western Europe’s tallest building.

My vantage point was one of the hotel’s Iconic City View rooms, featuring jaw-dropping 180-degree panoramic vistas from its floor-to-ceiling windows. To paraphrase one of the city’s most famous sons, Samuel Johnson, when a man is tired of such views, he is tired of life.

Situated on the south banks of the River Thames near London Bridge, a few miles east of London’s traditional hotel heartland, Shangri-La at the Shard is the latest European venture from the Hong Kong-based Shangri-La Group. Since opening its doors in May this year, the hotel's lofty setting has generated a buzz that has ensured a constant stream of guests, in particular UK residents on weekend breaks - though this is likely to change as word spreads.

As evidence of its nascent success, during our visit in early August the hotel was operating almost at full occupancy, despite not yet being complete. Most notably, the finishing touches were still being made to what is now London’s highest infinity pool on the 52nd Floor, whose unveiling we missed by a tantalising three days.

Already up and running is Gong Lounge Bar, positioned directly next door to the aforementioned pool and full to the rafters during our Friday night stay. In a world full of characterless hotel bars, Gong is surprisingly intimate and atmospheric, and strikes the right balance between gimmicky and fun with its drinks list that includes a whisky and blue cheese cocktail and a theatrical gin and cherry-based concoction served smouldering with dry ice.

Then there is the signature ‘Ting’ fine dining restaurant on the 35th Floor, flanked like so much of the hotel by tall windows to make the most of the dramatic outdoor scenery. But while other venues might adopt a “never mind the food, check out the views” attitude, Ting resists any such temptation, offering beautifully presented and expertly cooked European fare with subtle Asian twists.

Back in our room, we momentarily prized our noses from the windows to explore what else was on offer. Furnishings are stylish but simple, but the piece de resistance is the marble-clad bathroom boasting heated floors, walk-in shower, free-standing bath, Acqua Di Parma amenities and Japanese-style electronic toilet. Full-length windows – quelle surprise – allow guests to partake of their ablutions while enjoying London’s topography, with eagle-eyed aeroplane passengers the only threat to one’s privacy.

Waking the next morning to a glistening sunrise, I cast my heavy eyes once more over the city of my birth, the sun’s glare creating a miasma that made it hard to distinguish buildings you would usually recognise in an instant. In that moment I was emotionally affected in a way that no other hotel I had visited had ever achieved. And therein lies the simple but devastating beauty of Shangri-La at the Shard.