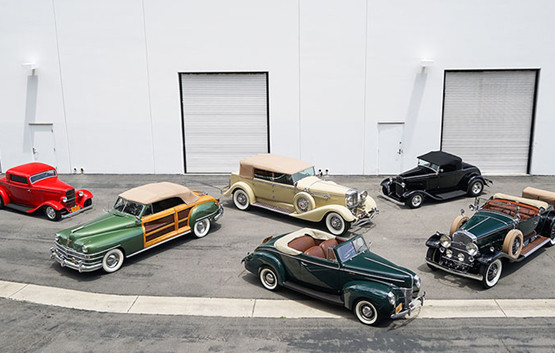 In addition to the previously confirmed line-up of Ferrari supercars and iconic customs, RM Sotheby’s has gathered an eye-catching selection of sought-after American Classics, iconic Mercedes-Benz convertibles, and vehicles with celebrity provenance for the fifth annual auction.

Highlights include a highly original, California-bred 1929 Duesenberg Model J, a beautiful Light Green Poly 1960 Mercedes-Benz 300 SL Roadster, and a 1970 Mercedes-Benz 250 C owned from new by Michelle Phillips of The Mamas and the Papas music band.

A staple in SoCal car culture, a pair of iconic European convertibles also appear at the single-day sale, led by a recently restored 1960 Mercedes-Benz 300 SL Roadster. The ultimate in style and performance, the 300 SL is finished in the unique combination of Light Green Poly over a Dark green interior, and is ready for reliable road use on vintage rallies, long-distance tours, or even as a daily driver.

The 300 SL is joined at the auction by another icon of 1960s luxury, a matching-numbers 1967 Mercedes-Benz 300 SE Cabriolet. The preferred choice of well-heeled American buyers in period, this particular 300 SE is one of fewer than 100 U.S.-spec examples for 1967, and comes to auction stunning in its original Dark Blue, wearing a recently refreshed restoration.

No auction within a stone’s throw of Hollywood would be complete without a few cars of the stars. RM Sotheby’s Santa Monica auction presents a 1970 Mercedes-Benz 250 C purchased new by Michelle Phillips of The Mamas and the Papas. Offered out of single-ownership and still wearing its original California blue plate, the car comes complete with its original service manual bearing Michelle Phillips name.

Also set for the Barker Hangar auction podium is a 1965 Lincoln Continental Executive Limousine by Lehmann-Peterson. One of just 15 produced for the model year, the Lehmann-Peterson limousines were favored by celebrities and government officials alike, with this particular example owned by Steve McQueen in the 1970s.

As a prelude to the Santa Monica auction, select sale highlights will be available for advance preview at upcoming Southern California events, including the San Marino Motor Classic and the Rodeo Drive Concours d’Elegance.