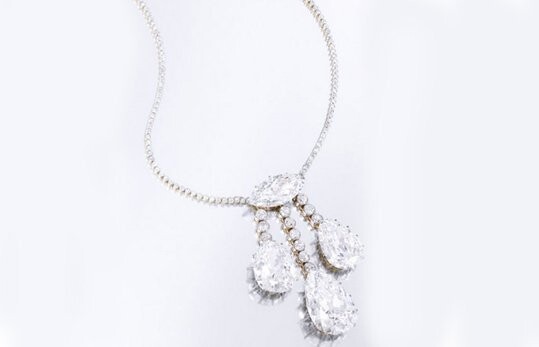 Sotheby’s ‘Magnificent Jewels’ auction achieved an impressive $44.2 million last week, buoyed by results for stones and jewels from a range of prominent collections.

The top lot was a platinum-topped gold and diamond necklace that was presented to Helen Hay, an American writer, socialite, and philanthropist, on the occasion of her marriage to Payne Whitney in 1902.

Meanwhile, jewels from the collections of Estée Lauder and Evelyn H. Lauder achieved a joint total of $3.9 million, which will go toward benefiting the Alzheimer’s Drug Discovery Foundation, and the Breast Cancer Research Foundation, respectively.

Elsewhere, a pair of platinum, emerald and diamond pendant-earclips that originally belonged to the Grand Duchess Vladimir of Russia- and were smuggled out of Russia by an English friend of the Duchess following the abdication of the Tsar in 1917 – sold for $1.1 million; and Marlene Dietrich’s 14-carat tri-color gold and lapis lazuli Cartier bracelet, circa 1940, sold for $179,000.

Sotheby’s expects total jewellery sales for 2014 to surpass $600 million. Sales to date in the category have reached $597.5 million, and the auction house’s last jewellery sale, of Fine Jewels, takes place in London on December 16th.