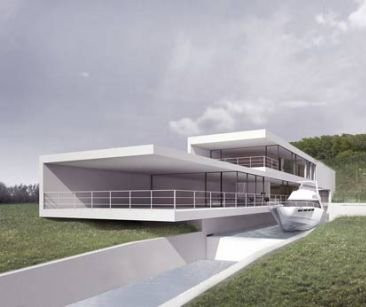 Poland-based MOOMOO Architects have designed a concept for a state-of-the-art house that features an area to anchor a yacht.

The Yachting House concept, which was commissioned by a client, includes a water canal through the house's central area along with a lock lift which would enable a yacht to sail alongside the windows in the living room and kitchen.

Spread across 1,457 square metres, the house concept also features pristine land that can be used for sunbathing, parties or a children’s playground.

Lukasz Pastuszka, who has created the concept alongside fellow architect Jakub Majewski, said: “Mooring handles inspired the railings on the terraces, while lounge areas have a change of floor level, which relate to the seating arrangements on the stern of a boat.

“The interior of the house is characterized by simplicity and is finished with the warm tones of wood.”

If constructed, the house would not be the first to feature a private yacht berth. A waterfront estate in Newport, Rhode Island and owned by Campbell’s Soup Heiress’ Dorrance Hamilton also boasts its own private dock, whilst the Mecox Bay's Water Mill estate with its own private island is currently listed for sale at $40 million.