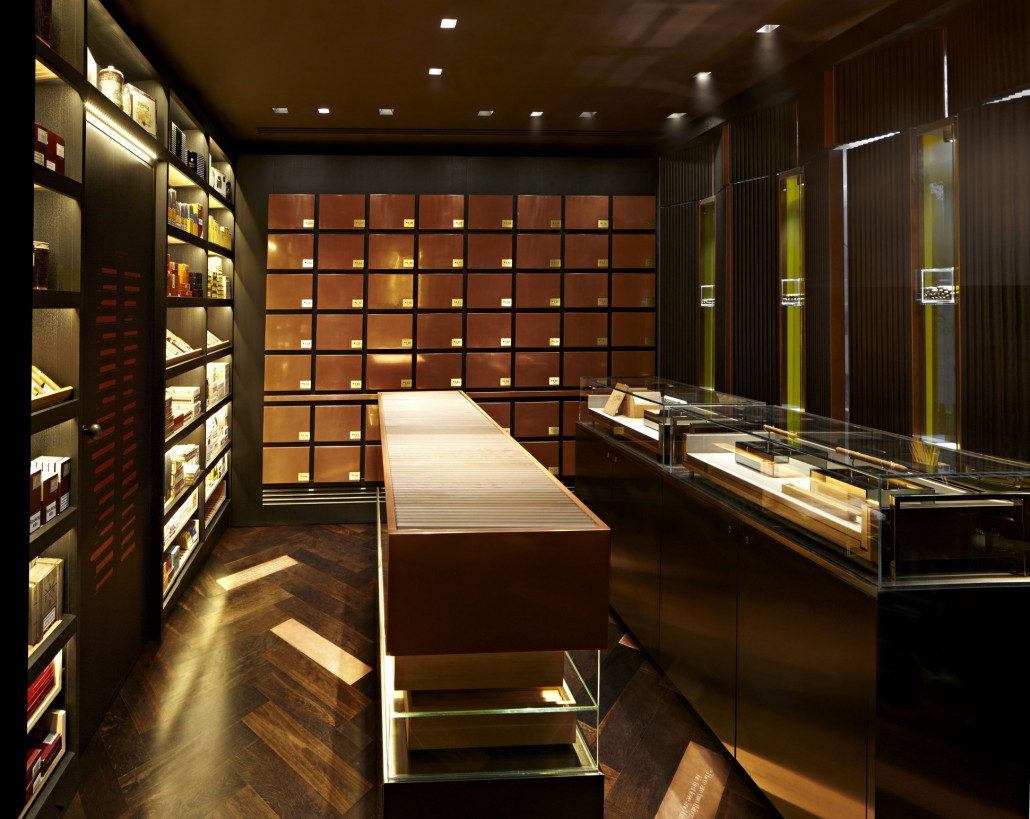 Superyachts.com Visits 1a St James’s: A Temple for Fine Cigars

Walking through the network of streets that occupy the London district of St James’s is a little like taking a misty-eyed journey into the past. Nestled behind the bustling thoroughfare of Piccadilly, the area is a living, breathing monument to trades and industries that you instinctively feel belong to a bygone era.

Yet the tailors, cobblers, tobacconists and Gentleman’s Clubs that inhabit this relic-like quarter of the capital are alive and well, their enduring role in the commercial rough and tumble of 21st London validated by their mere presence.

Sitting among them on St James’s Street, home to a remarkable 9 stores over 100 years old, is an exemplar of retro retail with a contemporary twist. Opened just over a year ago, 1a St James’s is a temple of fine cigars that is part emporium, part club, but 100% unrepressed luxury. Here, tobacco aficionados are invited to sample and enjoy the immersive pleasures of the world’s best and most sought-after hand-crafted cigars.

Located on the original site of renowned Gentleman’s Club ‘The Cocoa Tree Club’, 1a St James’s is owned by British American Tobacco, who have licenced the name of tobacco-turned-apparel company Alfred Dunhill to allow them to sell original Dunhill cigars among its panoply of high-end products.

The store comprises a variety of spaces, the centrepiece of which is a lounge for informal cigar sampling. Coffee, Wi-Fi and ambient music help create a relaxed setting suitable for either solitary enjoyment or more social gatherings.

Elsewhere there is a retail area selling an array of cigars and smoking accessories, a Master Blending Room offering a potted history of cigars including a ‘tobacco wheel’ and information on the arts of blending and rolling, and a temperature-controlled cigar room housing personal humidors that can be rented out annually for £1,200 per locker (in return each customer is given a credit of the same amount to spend in the store).

“People like to travel and know they have their cigars in one place,” says Robert Emery, store manager and arguably the pre-eminent cigar expert in the UK today. “They will store cigars all over the world but they know in London they have, for example, Box 118 and they can come and open it up, invite colleagues, friends, and business associates.”

Ever present at 1a St James’s is a team of highly knowledgeable staff, headed by Mr Emery, His expertise and passion shone through as he showed us around 1a St James’s on a rainy November afternoon – the perfect weather, arguably, to retreat to such lavish, tranquil environs for a premium smoking session.

According to Mr Emery, the success of St James’s, and indeed the demand for such high-end cigar services, has been driven by a revival of interest in fine tobacco that emerged in London following the 2007 prohibition of smoking in public places. The legislation included a concession for specialist outlets with at least 50% of its products being tobacco-based to allow in-store smoking.

“I think it goes back to 2007 when people realised things had changed forever,” he said. “In more recent years there’s been a large investment in outdoor heated terraces so people can smoke in comfort outdoors and not be a slave to the weather conditions.

“So I think it’s more accessible for people to light up in London than it was even five years ago, because there is a demand. It took a while for people to get on-board with that, but I think in London we are quite tolerant if people do things in a sympathetic way.”

As luxury experiences go, pricing in the store is certainly sympathetic. An average cigar costs up to around £60, beyond which you are into the territory of collectibles, which can rise anywhere up to around £1,000 (Mr Emery pointed me towards an extremely rare Dunhill Havana cigar from the 1980s for sale at this price point).

“Cigars become rare because of their limited production,” he explained. “Also the age of them which often means they’re no longer available. People prefer cigars that are 5-10 years old than ones that were rolled this year and this is why there’s a huge market for collector and auction cigars.”

As evidenced by the presence of tobacco from such exotic climes as the Dominican Republic, Uganda and Nicaragua, the popularity of fine cigars extends far beyond London. So what does Mr Emery believe is behind the age-old fascination with this decadent, leaf-wrapped substance.

“I think the nature of a hand-made cigar is that it is the very finest,” he told us. “It’s that very unusual thing in life that is utterly made by hand, there’s no mechanisation at all. People appreciate that because it unravels the story, going back to the seed and the fields and the plantations and the rollers. It is that link with something that is the best in the world but also truly natural that’s highly appealing.”

And where better than in the heart of historical London, with its own urban back-story, to enjoy the fruits of labour whose roots lie in the fields of countries far away, the senses awakened and inspired by the aromas of distant places and a distant past.