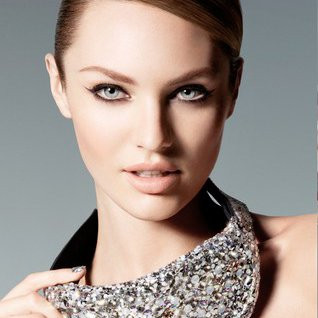 Created by Ronnie Cooke Newhouse of House + Holme in London, and shot by Knight, the campaign features South African former Victoria's Secret model Candice Swanepoel in a range of poses, clad in crystal-encrusted objects including a motorcycle helmet, a baby barbell and ski goggles.

Nadja Swarovski of Swarovski Crystal Business said: “We wanted the campaign to capture the essence of the cool, contemporary woman.

“Beautiful, healthy and strong, she is in charge and can compete in any way. She is also fun and kind of humorous.

“Nick catches her spirit perfectly. But more importantly, this is an overarching corporate campaign celebrating the modern woman and Swarovski crystal as a design ingredient supporting creative expression.”

The campaign will appear in the March issues of a range of fashion, lifestyle and culture titles including the British, American, and Chinese editions of Vogue, British Harper’s Bazaar, and Vanity Fair.

Swarovski was founded in Austria in 1895.