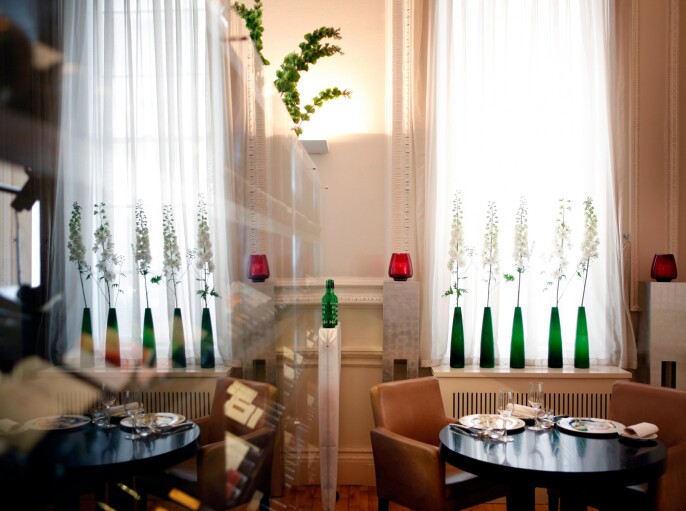 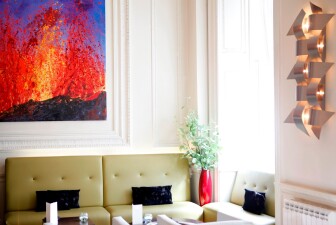 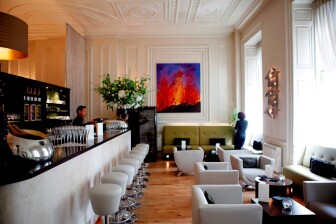 Located in a beautifully restored Georgian townhouse on Portman Square in Central London, Texture Restaurant & Champagne Bar is part of an elite troupe of dining venues that have propelled modern Scandinavian cooking into the gastronomic spotlight in recent years.

Awarded a Michelin Star in 2010, Texture is the brainchild of chef Agnar Sverrisson and sommelier Xavier Rousset, priding itself on fresh and healthy ingredients and, as they are keen to remind you, cooking without any of the butter and cream that are such mainstays of northern European cuisine.

The venue itself combines contemporary elegance with original features including artwork by renowned Icelandic artist, Tolli. A healthy sprinkling of diners were present during our Saturday afternoon visit, but even with a full house it strikes you as a restaurant that would engender only hushed tones from its patrons. The reason, as we were to discover, is that Texture takes its food very seriously indeed – and with sublime results.

To begin proceedings, a champagne aperitif was served with root vegetable, parmesan and fish skin crisp along with barley, dill, yogurt dip. The fish skin was sensational; incredibly thin yet packed with so much flavour that you were left bewildered by the science behind its creation.

Our opening starter was gravadlax with cucumber and horseradish snow. The snow served as the perfect refreshing accompaniment to the texture of the gravadlax, whilst the cure of the fish delivered both sweetness of flavour and density of texture.

Next up was new season English asparagus with parmesan snow, dressed with a scattering of hazelnuts and finely chopped black olives. Something of a signature at Texture, the snow played on your expectations of how parmesan should taste, whilst the hazelnut brought a crunch, and the olives a brininess, to create a subtle balance of flavour and texture. In addition to curious snow concoctions, Texture also specialises in Riesling wine and with this course we sampled a 2006 Australian variety, which on paper seemed an unusual choice but in fact offset the dish superbly.

The opening main was an Icelandic salted cod with barley risotto, shellfish stew and grapefruit purée. The purée achieved almost the texture of curd – all the more extraordinary given its lack of butter – whilst its citruseyness was an ideal partner to the expertly-cooked salted cod which was crisp on the outside and flakey on the inside. A 2009 Collioure Tremadoc from the South of France, offering strong notes of dried apricots, was an excellent accompaniment.

Next we were served a ribeye of beef with ox cheek, bone marrow, horseradish purée, olive oil mayonnaise and chips. Given Texture’s prevailing style of cooking, this ought to have been the dish where they came unstuck. After all, a man who creates snow from cucumber is not a man you would also expect to cook beef three different ways – at least certainly not as expertly as this. It was sensational, whilst the triple cooked chips were similarly of a level that would match any of the famous purveyors of steak and chips in the UK. A 2008 Pedra Basta from Portugal was a juicy, soft and beguiling match for the meat feast.

A blood orange granita and jelly with spiced cream pleasingly cleansed the palatte and made way for the final course: an Icelandic Skyr consisting of rhubarb, museli, granité and ginger. The simple and elegant flavours managed to bring an indulgent meal to a finale on a note that felt fairly restrained in comparison with what had come before. Light and not too over-bearing, its spring-time flavours made you feel positively virtuous, whilst a 1999 Riesling Auslese was another opportunity for Texture to showcase the versatility of Riesling, picking up sweeter candied fruit notes that go so well with dessert.

This was a remarkable meal at an outstanding restaurant that sends you away with only one burning question: what more must Texture do to achieve a second Michelin star?