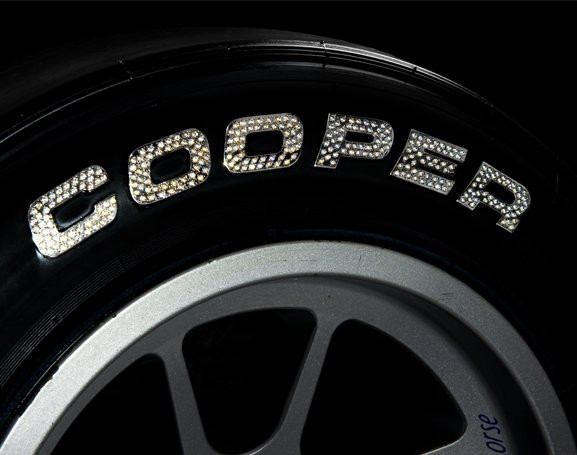 Tyre manufacturer Cooper Tire has designed a set of jewel-encrusted tyres to mark the diamond anniversary of Formula 3 racing in Britain.

The tyres were made by London jeweller FK Diamonds using a combination of diamonds and Swarovski crystals. Each jewel was set to the tyres on a Cooper logo cutout in metal.

They were unveiled at the famous Silverstone racetrack during the launch of the 2011 Cooper Tires British F3 International Series, where they were used on the race car of Carlin driver, Rupert Svendsen–Cook.

The 2011 season is the 30th consecutive year that Cooper Tire have sponsored the prestigious championship.

Julian Baldwin, managing director of Cooper Tire Europe, said: “The diamond anniversary is huge landmark for Formula 3 and we are proud to continue our long-standing relationship with one of the most important single-seater championships in the world.”

The first round of the Cooper Tire British F3 International Series takes place at Oulton Park in Cheshire, north west England, on 23-25 April.