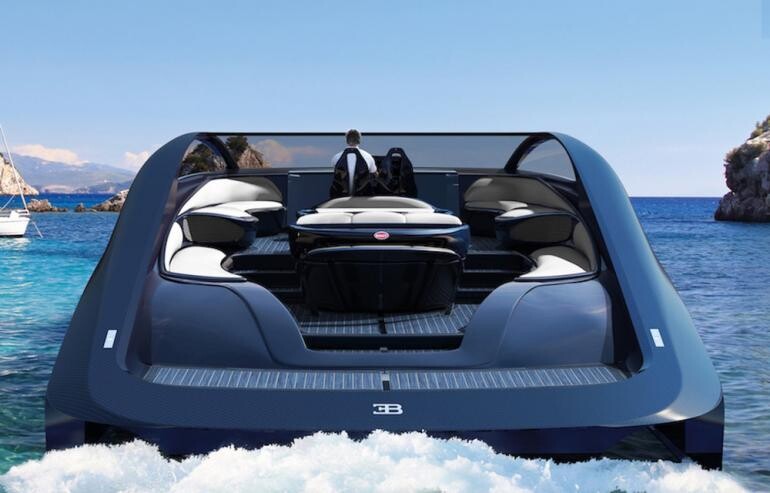 The Bugatti Evolution Moves from Supercars to Superyachts

Following the lead of Jaguar, Aston Martin and Lexus, world renowned French supercar makers Bugatti are the latest prestigious auto name to diversify into the rarefied world of superyachts.

Called the Niniette 66, Bugatti are to create a 20-metre yacht as part of a collaboration with luxury boat builder Palmer Johnson.

Featuring a number of design nods to the brand new Bugatti Chiron supercar, the yacht boasts the same large, sweeping lines where the air intakes are placed on the car, but instead curve up to create the yacht’s superstructure. The hull and deck are both made from carbon-fibre, and buyers can apply a two-tone Chiron inspired colour scheme too.

When it comes to power and performance, the differences between the Niniette 66 and the Chiron are more notable. While the car gets a quad-turbocharged W16 engine producing 1,479bhp, the yacht is less powerful, with its 1,000bhp V8 engine enabling a top speed of 44 knots – almost 51mph. A more powerful 1,200bhp engine is on the options list, but only nudges the top speed up by 5 knots to 55mph.

The yacht’s deck is trimmed with carbon fibre, leather, and a striking natural blue morta oak, while the lower deck is home to a Jacuzzi, with a sun lounging pad and drinks bar placed in the middle, and a small fire pit sitting ahead of the Jacuzzi. Up front, the driver is furnished with a Bugatti steering wheel and a huge set of digital binnacles and instruments.

Below deck is a lounge featuring furniture and decorations made from carbon-fibre, leather and marble. A large Bugatti horseshoe overlooks the salon, while adjacent to the lounge is a master bedroom with a double bed and bathroom.

When it comes to the yacht’s interior, buyers will be offered a number of customisation options, though an exact price for the Niniette 66 has yet to be announced.