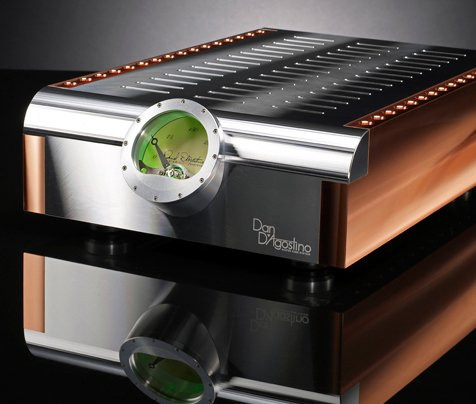 The $50,000 Momentum Amplifier from Dan D’Agostino

World renowned audio designer Dan D’Agostino’s Momentum is the first production amplifier to use copper for its heat sinks.

Launched at the CES (Consumer Electronic Show) in February, the Momentum is also the first amplifier offered under D’Agostino’s own name, and is billed as the Italian-American’s most visually and technically advanced products to date. D’Agostino has been designing amps for over three decades.

Despite delivering a remarkable 300 watts into 8 ohms, the amps’ chassis remains just 5 inches high and consumes less than 1 watt of power at idle, thanks to their highly efficient copper heat sinks and cooling venturis.

Each Momentum monoblock amplifier is hand-built and individually tested in D’Agostino’s Connecticut factory.

Co-founder and former Chief Engineer of Krell Industries, D’Agostino is widely considered one of the world’s best audio makers, and an influential figure in championing the use of high-powered solid-state amplifiers in high-end audio.