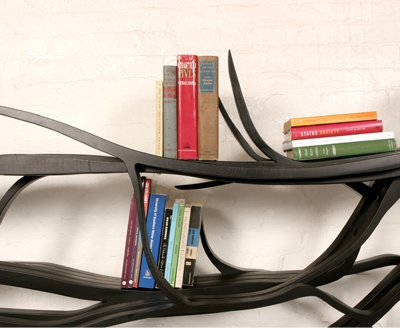 Chilean-born designer Sebastian Errazuriz, renowned for his unusual and eerie design and art pieces, has created a sculpted bookshelf inspired by his grandmother’s ivy-covered garden.

The Metamorphosis bookshelf, which was unveiled at an exhibition in New York late last month, is crafted from limited edition Baltic birch plywood shelf and hand-carved by the Italian company Horm.

With a nod to his grandmother's garden, in which he used thick ivy as natural shelves for his childhood garden toys, the bookshelf similarly runs along the wall resembling tree branches.

This latest creation is not the first time the New York-based artist has used trees for inspiration. Mr Errzuriz already received attention for his Bilbao shelf, in which a real tree branch was attached to a wall to create an organic display unit.

Priced at $75,000, the Metamorphosis bookshelf is currently on display at the “Beautiful Premonitions” exhibition at the Cristina Grajales Gallery in New York.